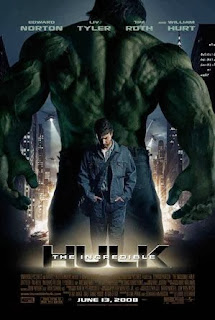 While The Hulk is one of Marvel's most famous heroes, he's never really been one of my favorites. I've never disliked him, but prefered Spider-Man, Wolverine, Captain America, and other super-heroes much more. I had seen all the films in the Avengers-related movies except for Hulk. I really liked Mark Ruffalo's portrayal as Bruce Banner/Hulk in the Avengers, but I was a little hesitant to see The Incredible Hulk as Banner is portrayed by another actor. 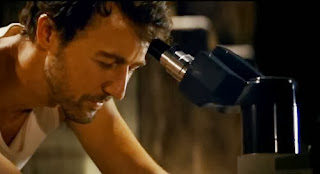 The film starts off with a very fast-moving origins story with Bruce Banner already affected by the experiment with gamma radiation. When he transforms the first time, his alter-ego leaves much havok for those around him. He flees to Brazil in an effort to suppress his anger (which causes the transformation), and give him time to find a cure.

However General Ross initially mislead Banner in re-creating the Super Solider program (which gave Captain America his strength), and chases Banner across the world to figure out how to use his super-strength as a tool for the army. The General is also aided by a skilled British officer who is power-hungry and obsessed with defeating Bruce Banner's super-self. He eventually takes an offer to be a new super-solider but transforms into a monster that rivals not only General Ross's forces but the Hulk as well. 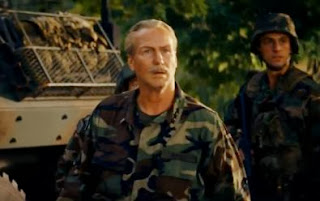 I honestly thought The Incredible Hulk was much better than I expected. It's about par with the other Avengers movies, though out of all them this is my least favorite. I thought Edward Norton did a great job as Bruce Banner, and I heard he actually changed the script to make it more true to the comics. I hope a second movie surfaces, because I would be delighted to see it.
Posted by Adam at 2:00 PM

I liked Ruffalo's portrayal much more than Norton's (although I usually am a big fan of Norton).

I saw this movie and thought it was pretty good. I really like Ed Norton, so I make an effort to see the movies he's in.

When my granddaughter was growing up, she loved the Incredible Hulk, In fact, she still has his sleeping back that she use by when,

I'm still trying to get to the theater to see The Butler. Can't seem to find the time. I'll have to wait for Redbox for The Hulk.

Enjoyed this one waaaay better than that first hulk movie

Yea... i kind of don't like hulk either. I've actually never seen any of the movies... but mayhaps I should check it out?

What Pat said. That first Hulk movie sucked. And made me angry.
And people don't like me when I'm angry.

I thought Edward Norton did a great job.

Eric Bana is the only Hulk for me (and Lou Ferigno)....