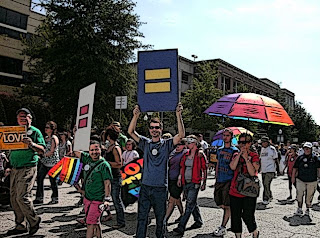 Back in 2011, Daisy and I first went to Upstate Pride which was in it's third year. Last Saturday we went to it's fifth celebration which honors the LGBT community and it's allies. We went in 2011 with our Democratic youth group, last year to support our friend Deb Morrow's congressional run, and this year with our Unitarian Universalist Church. I chose to make my sign (with Daisy's a different color) based on the equality sign of the Human Rights Campaign. I thought I did a pretty good job with it. 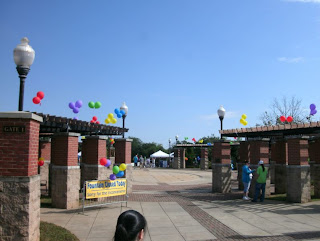 We got the festival pretty early. Before the march, there wasn't a whole lot of folks there. But about thirty minutes before noon, the crowds starts to show up. 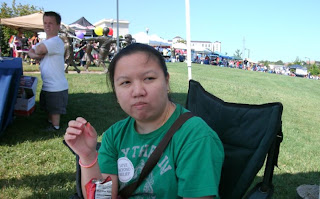 We actually got to see the local Democratic Party booth before we got to our church's tent. A local activist named Tom was the only person running it, as the local party hasn't been the same ever since we lost our headquarters to a flood. So we stayed for a little bit to help out. 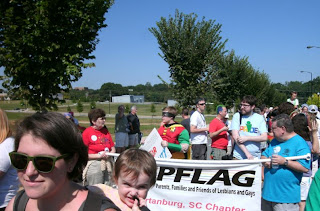 The march began at noon, and we all got prepared. We marched with our Unitarian Universalist Church, and we saw Robin behind us. I sadly didn't see Batman, Nightwing. or even Alfred anywhere. 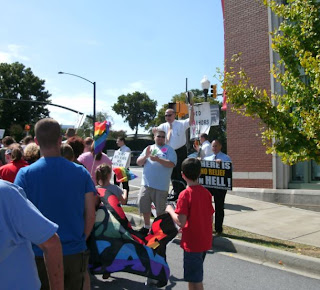 There was a church protest group (which I believe is a Baptist church in Easley) near the beginning and they've probably been protesting Upstate Pride since the first one in 2009. In the original march, I heard about five to seven church groups came to protest. Now five years later, only one church group of (I think) perhaps seven people was there. They weren't very nice to say the least, but do have a right to their freedom of speech. 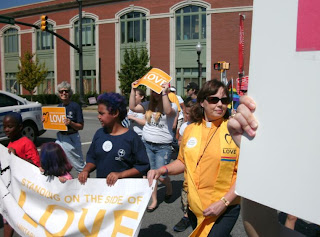 This is our minister leading our group in the march. I got to admit I do like the yellow minister uniform. I was proud to hear that the Unitarian Universalist Church actually hosted the first march, until they moved for more space to Barnet Park. I did notice a Lutheran Church at Upstate Pride this year in support of equal rights. While the UU Church is a diverse group of religious and non-religious free-thinkers, it was comforting to see a Christian church become an ally rather than a foe.

Unlike the last two years, we actually saw a decent amount of people on the march who weren't part of the crowd. The biggest group were the patrons of a pizza restaurant who were eating outside. I have to wonder how many people who saw the march, had no idea about it beforehand? 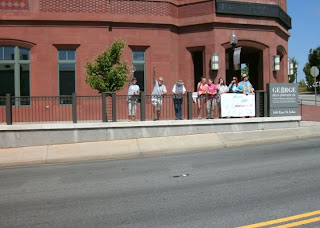 While most of the people who came to the festival (on-time anyway) participated in the march, I did see a few people (and friends) stay on the side-walk to watch the parade in support. An idea I had planned to do once marriage equality reaches all fifty states. 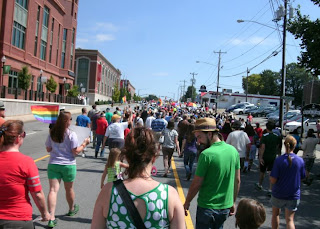 But despite getting a little sunburned, I had a great time. The crowd was estimated at about a little over three thousand people. Every year support for marriage equality gets stronger, and opposition gets weaker. Before the Loving v. Virginia Supreme Court ruling in 1967, I couldn't marry the person I love in my not-so-smart state of South Carolina. Until my brothers and sisters in the LGBT community have the same rights as myself, I'll keep marching with them.
Posted by Adam at 1:00 PM

I think you did an awesome job on the sign. I am intrigued by the Unitarian Universalist Church - there is one here in Lex. They seem very in line with my views. I am also glad that the Lutheran Church was part of the festival.

Good for you two for marching! It is so important to have a large turnout for Pride Marches. In Winnipeg in the old days, we used to get a few religious protestors too. We would just run up beside them and pose for pictures, smiling and waving. No one got in arguments with them -- we just treated them as a photo op -- "Hi Mom, here I am standing beside a homophobic bigot!"

And glad to hear that the UU church is working well for you. I love UUs -- they're good people.

How very wonderful of you and Daisy go out and march in support! Looks like a fun little parade and yes, you did a good job on the sign :)

Yae! Good for you! I'm right behind you!

What a great cause to march for, Adam! Yay to you and Daisy:)

lovely post! I am a strong supporter of the LGBT

whoooo hoooo! go adam and daisy. 3,000+ people is great. so glad you found people in your church that share your views. we keep hoping for marriage equality!

Straight to the Point !

A lot of people sure turned out, looks like fun time, besides the sun burn. Nice sign too

Looks like a great day in support of a very worthy campaign!

Good for you! Equality for all. Looks like you had a good turn out.

As a gay man, I'm thanking you for doing this.

bravo, I say, bravo... and you even matched the sign with your shirt :P

Good for you Adam! I applaud you and Daisy and for all who took part.