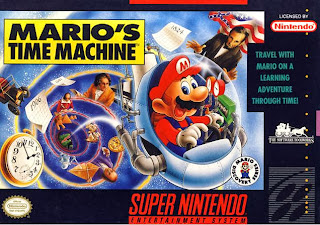 Despite being a video game nerd, I missed out of lot of games during the 90's. It wasn't until about 2000 where I made sure most of Christmas and Birthday presents would go directly towards video games. Before Gamestop we had a place called Funcoland, and it had not only the newest consoles but all the retro ones. I remember seeing Mario's Time Machine in the SNES (there was also a NES and PC version) section, and though it was like a lost gem. I never got it, but thankfully learned why it wasn't as well known as Super Mario World or Super Mario 64. 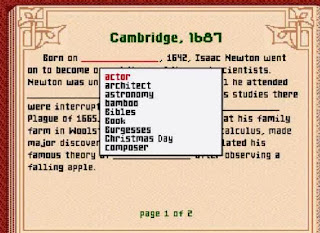 The main reason is obvious as soon as you start, yes that's right it's an educational game. Nintendo had tried doing this before with games like Donkey Kong Jr. Math, and there were even more games like this with Mario. Basically Bowser has taken historical items from the past (like Issac Newton's Apple), and it's up to Mario to return it to the owner. Each item has it's own little quiz, and you can return them if you know all the answers. 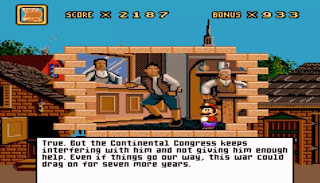 And if you don't know all the answers, then you're stuck going around areas asking people questions which will give you clues. In the game you'll go to Cambridge to see Issac Newton, Colonial America to see Thomas Jefferson, France to see Joan of Arc, and much more. 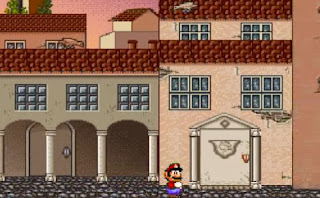 Unfortunately I did happen to play a little of Mario's Time Machine a few years ago, and it's pretty atrocious. For one the historic material is way too advance for most of the kids who played Super Mario World in 1991. And lastly the way to get answers to questions you don't know is beyond tedious and boring. Oregon Trail showed educational video games could be done right, but Mario's Time Machine showed it could easily be horrible.
Posted by Adam at 2:00 PM

They tried. Too bad you have to pack a game with blood and gore for it to be a winner.

I never got into these games but our son was a big Mario Brothers fan when he was small.

Yes, it was very very bad

I think I was the other way around, I played more video games in the 90's when I was growing up! lol

Never even heard of it

I think the kids played this one

OMG, you brought back a lot of memories about Funcoland!

The only time I played video games was when I babysat. It was fun.