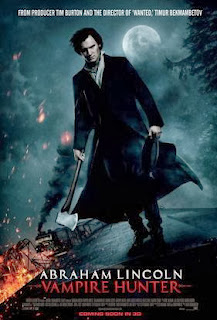 I remember hearing about Abraham Lincoln: Vampire Hunter in the winter of 2011. I thought the concept was genius, and learned it was based on a book of the same name from 2010. I had wanted to see it last year, but waited after hearing some negative opinions.

The films starts out with Abe when he was just a boy. His mother tragically dies, and when he grows up he seeks justice against the man responsible. However in their confrontation, he learns that his nemesis is a vampire. He's saved by Henry Sturges who tells him all about the world of vampires, and teaches him how to destroy the evil creatures. 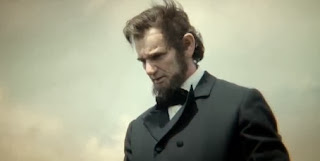 Despite advice from Henry, Abraham falls in love with Mary Todd, and becomes a politician. Lincoln eventually enrages the most powerful American vampire known as Adam. The Confederacy makes an alliance with Adam and uses his vampire minions to overwhelm the Union Army. Lincoln must lead the nation as a vampire hunter and a president to save the country. 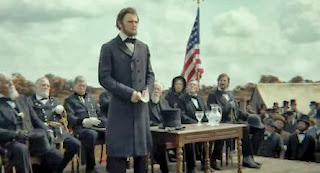 Overall I thought the film was rather disappointing. I loved the beginning as it was clever and made little sense. By the time Lincoln becomes president, the story becomes too boring and dull. Mainly because the film goes from silly to serious and I think it suffers from it. I thought it was decent, but nowhere close to how awesome I imagined it would be back in 2011.
Posted by Adam at 1:13 PM

I just couldn't bring myself to watch this one. Something about such a great president turning vampire hunter just didn't grab at my attention. Sorry you were disappointed in it though!

As usual, another really lovely post! I am so wantitng tow atch this.

xoxo;
What Kenny Hearts, a Lifestyle Blog by Kenny.

Try as I may, I just can't bring myself to watch a movie that mixes Lincoln and vampires LOL

The concept sounds cool but too bad they couldn't execute it better.

Title best thing about it, Adam :-)

Vampires are not my thing.

I heard very negative comments on it too so I decided not to see it. Kisses, Adam:)

No la he visto!!!
Saludos
http://judithbysucre.blogspot.com.es

I heard about this movie but was also put off by the negative reviews. After your review here I will probably try and catch it on the TV when it is shown.

I confess I was curious about this, but never got the inclination to actually see it. I really appreciate your review.

i just don't get it. agggggh