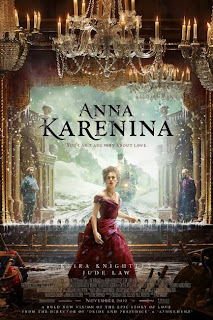 As I love history, Anna Karenina caught my eye though I was wondering if Anna Karenina was real or fictional. Turns out the movie is based on a novel of the same name set about 40 years before the fall of the Russian Empire. The author of the book was Leo Tolstoy, the same man who wrote War and Peace.

The main character is (obviously) Anna Karenina, who is a typical wife of a Russian Count. Thanks to her husband, she enjoys all the privileges of an aristocratic society. With a life much better than most of the citizens of Russia, her biggest complaint may be that her marriage is a bit dull and not very romantic.

One day she passes by a cavalry officer named Alexei Vronsky, and is immediately charmed by his good looks. While Alexei Vronsky has plenty of admirers who wish to be his bride, he also has feelings for Anna. They fall for each other, but the aftermath of Anna's marriage will make their new relationship very difficult. 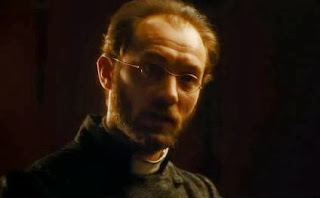 Overall I was a bit disappointed by Anna Karenina, even though it has some remarkable actors. I thought Keira Knightley, Jude Law, and Aaron Johnson played excellent roles. However I got a bit bored by the story, and it's honestly too melancholic for my tastes. I'm not sure how well it holds up to the original novel, but while I don't consider it a bad film, I think it certainly could have been a bit better.
Posted by Adam at 3:00 PM

I've tried several times to get into this story, both by reading the novel and through previous movie versions, but I just don't connect with it. Russian literature is often too lugubrious for me. I'm a delightfully shallow fellow.

I love your blog & reviews!

I've started following you on GFC and hopefully you can return the favor!

Never heard of this one until now

you mean you haven't heard of the book before you watched the movie, Adam? Well, it is only one of the ten most famous books ever in history.......

That book SUCKED! It took me a whole summer to get through it because I kept putting it down and walking away, but was determined to finish it. Anna and I would not be friends if she were real. She is a whore, a drug addict, and a weak female. No respect for her at all. I doubt I'd like her any better in the movie.

i wonder if i'll get bored when i watch it.