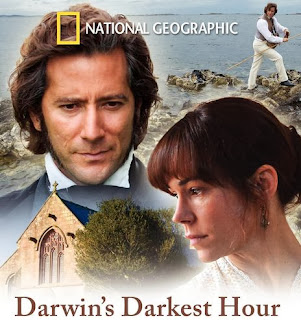 As many of you know, I have a fairly large interest in science and history. I had come across National Geographic's (and Nova's) movie about most of Charles Darwin's scientific career. The Darkest Hour refers to the time in his life where he meets two great struggles. The first is potentially wasting his life's work to another scientist who's discovered the same principals of evolution due to his fear of public reaction. The second is while he's also dealing with his career troubles, two of his children become very ill. 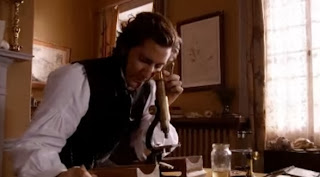 But the movie also covers more of his life. It shows Darwin's early life with his father's influence and advice. Also his decision to not become an Anglican priest, and his decision to join the crew of the HMS Beagle. It was on his voyage that he discovered his basic principles for his theory on evolution. 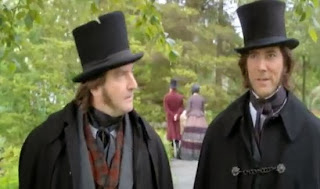 It also goes in great length to show Darwin's struggles against religious criticism. The first being the Captain of the HMS Beagle Robert FitzRoy. Then his wife Emma Darwin, though she is much more understanding that FitzRoy and willing to hear and understand of all her husband's ideas. Then it also show Darwin's commitment to making sure his theory is well researched and explained for when it does reach the world that it can't be criticized very easily. 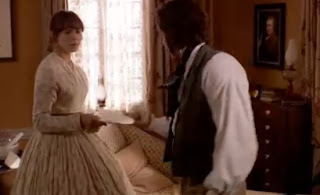 Overall I loved this film about Darwin's scientific career. I even ended up learning a few new things about Darwin. One example being his paternal grandfather Erasmus Darwin's contributions to scientific thought. Henry Ian Cusick is perfect as Charles Darwin, and the rest of the cast also perform very well. Charles Darwin was one of the most brilliant minds of the 19th century, and if he were alive today I think he'd be more than proud of Darkest Hour.
Posted by Adam at 8:22 PM

Very few people know that Darwin's theory that man was descended from apes was confirmed when the captain of the Beagle threw poop at him when they reached the Galapagos.
Science can sure be weird sometimes.

I have never heard of this one. Sounds very interesting though!

I saved this film to watch during the week( or next weekend). It seems very interesting.Thanks, Adam. Kisses:)

Sounds good! I'll keep my eyes peeled for it if it's rebroadcast on TV!

This sounds very interesting. I've read several articles about Darwin's life which is very interesting. His wife was actually also his first cousin and I think I've read that he felt a little guilty that marrying a relative so close in blood might not have been the best thing for his children.

that aspect of his life is in the movie. He was a devoted husband and father. Such was a rare event for a man in the 19th century.