Fact of the Day: Japan's Manchuria 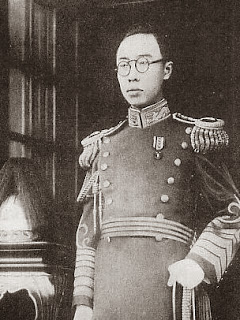 During World War II, Japan's victory in the Manchuria region in China allowed them to install their own government there. They even made it an actual nation with former (and last) Chinese Emperor Puyi as its monarch. Though Puyi was merely a puppet ruler and the nation known as Manchukuo dissolved after World War II. After Soviet occupation, the land eventually went back to China.
Posted by Adam at 12:00 AM

Great movie about him: The last emperor

here are a lot of interesting informations on your blog

My goodness, I didn't know that.

Thanks for the history:)

Thanks for sharing, Adam.

I am learning a lot of things with your blog. Really interesting. Kisses:)

so many poor people died there during the Japanese invasion. It's a very sad part of their history

China always seems to win in the end

It went back where it belonged!

I've said this before but you would totally rock at Jeopardy

A puppet ruler in government? But that never happens!

The guy has a strange poise.

And then China went to Walmart. It's the Circle of Life, I suppose.