Fact of the Day: Political Direction 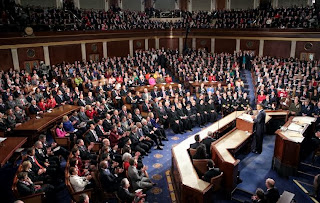 In politics liberal-leaning parties (such as the U.S. Democratic Party) are considered on the "left" and conservative-leaning parties (such as the U.S. Republican Party) are considered on the "right". However the term predates many modern political movements. It originated during the French Revolution in the French National Assembly as supporters of the King were seated on the right while those who opposed the monarchy were seated on the left.
Posted by Adam at 12:20 AM

Email ThisBlogThis!Share to TwitterShare to FacebookShare to Pinterest
Labels: fact of the day, france, politics

And now both are kind of screwed.

That's quite interesting! I never knew about its origins.

I had always wondered where the directional descriptions came from. Interesting.

In Italy wherever they seat, they still remain clueless and uneuseful|
Don't Call Me Fashion Blogger
Facebook
Bloglovin'

Interesting fact! Should have known those Frenchies were at the bottom of it.

nice to get to know where all of this is coming from :)

So the king knew who to off I guess

It's interesting to learn that this originated from actual seating arrangements.

I didn't know that one!

Did not know this...thanks for sharing, Adam:)

I didn't know this. At that time I think I would have avoided a seat at the French National Assembly in the hopes of saving my head.