Fact of the Day: Richmond 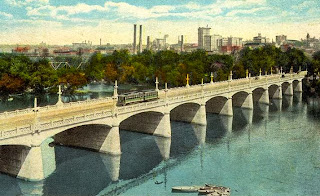 The capital of the state of Virginia, Richmond was named by a colonel named William Byrd II. Byrd chose the name Richmond after a town of the same name in England, which is now part of present-day London. The name was chosen because he thought the James River looked very similar to Richmond Hill's view of River Thames.
Posted by Adam at 12:08 AM

Email ThisBlogThis!Share to TwitterShare to FacebookShare to Pinterest
Labels: england, fact of the day, Virginia

This leaves me wondering how the James River got its name, and how Richmond, CA was named...and so much more. It is interesting to learn the origins of names of places.

Interesting detail! Thank you Adam for stopping by at my blog. I find it very surprising that you never travel for food! Don't you think it's different to visit places in order to eat their local food. I'm sure the ingredients aren't the same...

it's interesting how people got these ideas back in the days :)

we have a lot of English names in Toronto too.

Pretty nice city, despite all the murders.

There are a lot of places named after areas in England.

I used to go to Richmond, Virginia a lot for work conferences and such. It was quite a nice area and I enjoyed the drive there.

such a lovely bridge that is

Nice bridge, and we have a few places in Australia called Richmond.

Kick the british out and keep the names

Maybe I'm just vain but I'd prefer to name something after myself for that little dose of immortality. Then again, if I was William Byrd, I don't know how many people would want to live in Byrdville.

I live just a couple of miles from Richmond, England. It's a beautiful place and this picture looks really lovely too!

The bridge is very pretty!

This is such a lovely post dear! Already excited to see your future posts.

xoxo;
What Kenny Hearts, a Lifestyle Blog by Kenny.