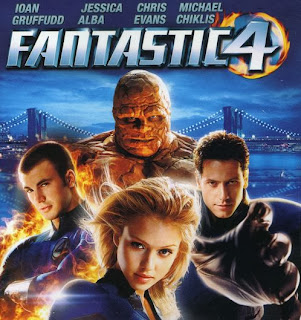 When Fantastic Four came out in 2005, I wasn't terribly interested. I also had very little nostalgia for the team as I don't remember them having a cartoon in the 90's either. I heard some negative things about the movie, but I was rather curious to see it. Especially since Chris Evans (who's currently Captain America) is in it as Johnny Storm. 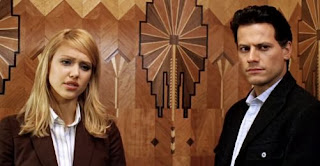 The film starts with Dr. Reed Richards and his friend Ben Grimm asking Richard's former class-mate Victor to use his space-station for a scientific experiment with promising results. While in space, Dr. Richards has a miscalculation and things go horribly wrong. However they return to Earth safe and sound.

Shortly afterwards, everyone on the space-station slowly discover they have super-powers. Richards can stretch, Susan Storm can turn invisible, her brother Johnny is a master over fire, and Ben Grimm has become incredibly strong though he loses his human appearance. The team quickly become famous, though they soon will face the evil Dr. Doom who plans to annihilate the Fantastic Four.

Honestly Fantastic Four was a good bit better than I was expecting. It was entertaining, and I enjoyed the scenes where the team struggles to work together and accept their new powers. Ironically its biggest fault is Dr. Doom and their battle against him. He's one of Marvel's greatest villains, but I thought he was rather lame in the movie. But overall, it's a decent super-hero film, but it could have been much better.
Posted by Adam at 5:00 PM

Oh I haven't seen this film!

Thank you for your comment! We don't call it soccer, we call it football haha

It has Jessica Alba in it so that's enough for me. Kidding. Kinda.

I thought the lead-up was rather tiresome. I know they had to explain how they became the FF, but it seemed to take forever. I very much agree with you about Dr. Doom. He's a fantastic villain who was wasted. Even in the Silver Surfer sequel....meh. I'd go see a third one, though. I read their comic books and really liked them.

I actually really like this film and its sequel. Jessica Alba is not my fave actress, but I thought she was ok here, and have always been a Chris Evans fans:D

I want look like Jessica Alba. She is so pretty:(

I adored the cast in this one, such a perfect group! I think the new remake will be bad

The Fantastic Four were my favorite comic book heroes when I was a kid. Unfortunately, I was disappointed in this movie.

I never saw this movie. Maybe some day!