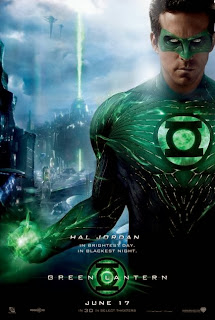 Outside of Batman and Superman, my favorite lesser-known superhero of the Justice League had always been the Green Lantern. However back in 2011 I didn't pay much attention to the Green Lantern film when it arrived in theaters. I later heard it wasn't that great, but I thought I would eventually give it a try. 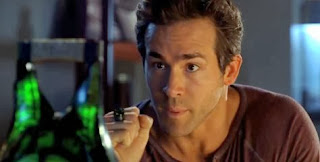 The film starts out with Hal Jordan, who is a talented pilot. Though his reckless actions while flying cause his career to hit a low-point. Though out of the blue he is almost magically transported to the spot of a alien spacecraft. In it he meets the dying alien Abin Sur, who informs Jordan that his ring "chose" him. 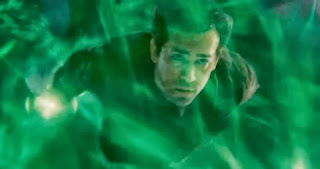 Overall Green Lantern was a much better film than I expected. Ryan Reynolds didn't play a perfect Hal Jordan but I wouldn't mind seeing him in a future film about the Justice League. I also thought Blake Lively did a great job at Hal Jordan's love interest Carol Ferris. Though the film is far from perfect , and my biggest complaint is that Parallax is a rather lame super-villain. It's a decent movie, but I think if the sequel (if they make one) features Sinestro as the main villain it could be a lot better.
Posted by Adam at 5:00 PM

I must have past this film by! RR looks the part though doesn't he? Bet there'll be trilogy!

I saw this movie and really liked it. I love superhero movies!
Algo Así

I passed this one by, may watch it one day

I heard this movie sucked but I heard Green Hornet sucked, too.
Maybe it has to do with the color green?

Good review. It wasn't terrible, but it wasn't all that good either. Just a bit of a waste of a good superhero.

adored both Ryan adn Blake in their roles and all the green in the film was like heaven for me :)

Nice review. I have never seen it but it must be recreative ! :)

i just couldn't watch it. i don't know why i don't like ryan reynolds. i guess he just seems so dorky.