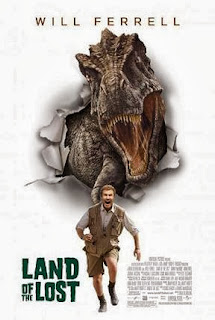 I actually don't think I ever saw the original Land of the Lost TV series from the 1970s. But I do remember watching the remake TV series back in the early 90s. I do remember back in 2009 when Land of the Lost first hit theaters. I mainly ignored it, because it had been ages since I've seen the 90's series, and I wasn't too sure if the Will Ferrell film would be true to its roots. Though now four years later, I decided to give it a chance. 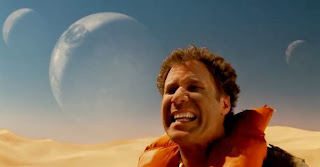 The story begins with scientist Rick Marshall being ridiculed for researching far-fetched theories on time and time-travel. After losing much of his motivation, a woman named Holly Cantrell tells Marshall that not only did he inspire her but honestly believes in his ideas. They go out in the desert to test an experiment, and find out that they did travel in time. Though they wind up in the mysterious Land of the Lost along with the tour guide Will who was helping them. 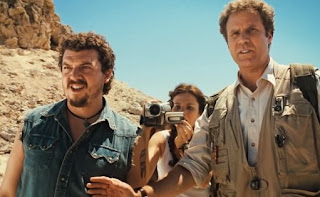 They discover that the Land of the Lost is mostly a place of dinosaurs and beasts. Marshall comes to the rescue of Enik, a strange creature with a genius level of intelligence. He warns the group that the evil Zarn will try to conquer modern Earth if he isn't stopped. So Marshall leads both Holly and Will in a quest to get back home and save the Earth. 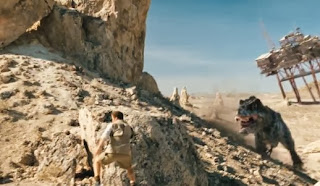 Overall Land of the Lost isn't that great of a film. Neither is it true to show (at least the 90's one), but almost like a parody of it. It's a goofy comedy that could of been better separate for both Will Ferrell and Land of the Lost. It has its moments (I really liked the final scene), but neither the action nor the comedy can save this one from mediocrity.
Posted by Adam at 2:00 PM

Email ThisBlogThis!Share to TwitterShare to FacebookShare to Pinterest
Labels: land of the lost, movie review, Will Ferrell

Hi Adam! I didn't see this movie, although I'm usually wanting to see anything with dinosaurs in it. I'm not sure how many times I've seen Jurassic Park! Have a good one!

I want to see this movie. How have I missed all these movies you keep posting about???

I got lost on the way to that land!

The original 70's series was so cheesy but I loved it!

I never saw this one! However, I do see you have a new blog look. I like!