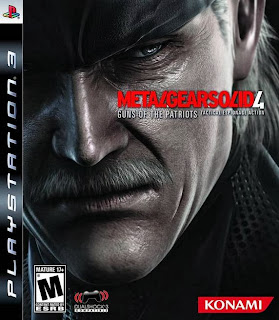 Back in 1998 I was almost unaware of Metal Gear Solid on the original PlayStation. It wasn't until Metal Gear Solid 2 was announced that I was aware of how popular the series really was. I played the remake of the original called Metal Gear Solid: Twin Snakes on the Nintendo Gamecube and loved it. I also loved the 2nd and (especially) the 3rd game on PS2. However it took me until just recently to get a PS3, and I made sure Metal Gear Solid 4 would be my first adventure on the console.

The game takes place five years after the events of Metal Gear Solid 2, with most of the world in some type of war or conflict. Snake is taken out of retirement for one last mission. He arrives in the Middle East but later will visit other areas of the world including one very familiar spot. The newest game-play additions are the 3rd person aim, a chameleon-like camouflage suit, and a new (and ironically inferior) radar. 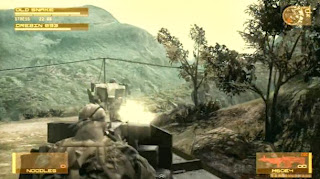 I will have to say, even with all my experience with the Metal Gear series I had to take some time adjusting to Metal Gear Solid 4. The first area you land in is a total war-zone and using stealth is much different than before. Also in the older games, most of the non-boss enemies were typically average soldiers, but you are now faced with unmanned vehicles. Such as the walking Gekko tanks which are quite fearsome. 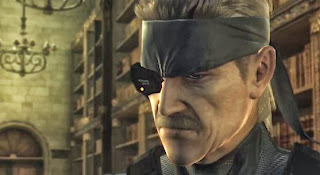 Overall I thought 4 was a fantastic game. Though while I enjoyed the story, there was some parts I wished were different such as Snake's accelerated aging. While I enjoyed the variety of each location, some (especially the last one) don't just make stealth optional but it's almost impossible to get passed many areas without an epic battle. While the third game is my favorite (so far) in the series, the fourth lives up to its pedigree.

Not for me Adam.

Hello, thanks so much for stopping by my blog and commenting!
Also not for me...

ohoh not for me either - I guess not many girls like this ;) but have fun!!

You are out of my league with this one.

I've been seeing your picture on many comment pages for blogs I follow and when I learned you write about history and trivia I decided to join your blog. I look forward to reading your posts.

Last one I played was 2 I think.

I still think Snake Eater was the best one.

Snake Eater is my absolute favourite. 4 was great, but I think it was very tough to get into for newcomers. People who hadn't played the others just found it be confusing. Since I've played them all though, I thought it was brilliant.