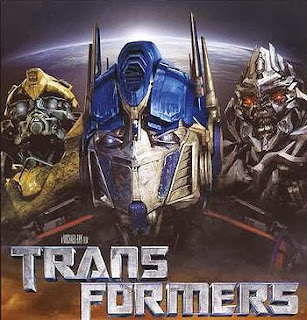 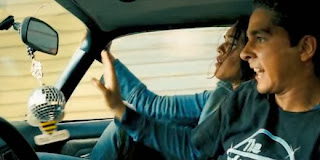 The film starts out with a strange alien robot causing havoc. The army isn't sure of the situation, and is desperate for answers. One of the evil robots find a young man named Sam, and Sam finds out that the evil forces are called Decepticons. At the last moment Sam is saved by a mysterious car with no driver. The car turns out to be Bumblebee, a member of the good counterparts to the Decepticons.

Sam and his friend Mikaela eventually meet Bumblebee's leader Opitmus Prime. He informs the duo that both sides are looking for a powerful cube. Prime wants to use it to rebuild their home-world. While the Decepticons want to use it to take over the universe. Sam agrees to help Optimus Prime find the cube before evil finds its first.

Overall I thought Transformers was a mediocre film. Granted I didn't have a lot of nostalgia for Transfomers, so seeing them in a major motion picture wasn't that big of a deal. The battles even with all its action and chaos didn't seem very epic to me. My biggest compliant is that many of the scenes that feature Sam are corny and embarrassing. It's almost middle-school level humor and wit, and the rest of the film wasn't good enough to convince me to watch the sequel.
Posted by Adam at 9:22 PM

great movie , although I prefer the animated series

I saw the first one and thought it was "meh", so I never saw the sequels.

First was meh, second was even more meh, never watched the 3rd. Bay will royally screw tmnt up

It's strange, that I didn't watch this movie, but I want.

back in the day, my bro watched the transformers cartoon so much,i know the jingle. "transformers more than meets the eye. transformers robots in disguise." i don't think i ever even actually watched the show. he had it on while i was walking from one place in the house to the other while the tv was on.