Fact of the Day: Booth Irony 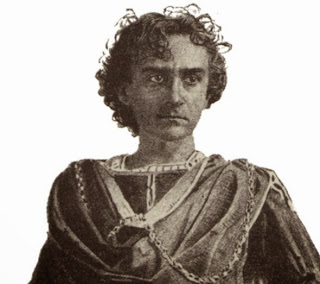 In late 1864 or early 1865, actor Edwin Booth saved a young man who had fell off a train platform. While the young man knew Edwin due to being a notable actor, Edwin Booth did not know the name of the person he saved. Months later, he found out that the young man was the President's son Robert Todd Lincoln. Which brought Edwin Booth some comfort, as he was ashamed that his brother John Wilkes Booth had assassinated President Lincoln shortly before he learned the news.
Posted by Adam at 9:59 AM

What a tragedy about Lincoln and a perfect case of what if...? I think that, paradoxically, he was the South's best friend. I also feel that, if he was allowed to be president immediately after election (oh, I'm not advocating changing the Constitution for that), the Civil War may not have happened. Hopefully, the South would have realized that he was only against the spread of slavery. But, I could be wrong. Who knows? Still a tragedy.

Wow the way the world turns

Man, the world is small sometimes...

I have heard about this. It's really amazing, isn't it?

It's a small world after all.... very interesting fact!