Fact of the Day: Cabinet Anger 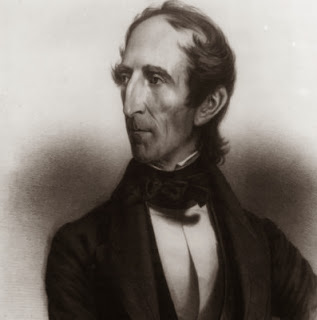 While John Tyler had been the Vice President of William Henry Harrison of the Whig Party, when Tyler became President (after Harrison's death) he found himself in constant disagreement with many in his party. One presidential veto angered his own cabinet (which had been part of Harrison's) so much that they resigned in protest except for Secretary of State Daniel Webster.
Posted by Adam at 9:28 AM

He has an uncompromising kind of face.

Yeah, I'm with Debra. He just looks like a fun guy to work with, doesn't he?

LOL at the above comments :)

Looks like he could have used a wig or a definite new hair do.

Very interesting as I didn't know any of this. Say, is that picture a caricature? The head looks much too big for the size of the body.

Ole Tippecanoe shouldn't have been such a bigshot. He shoulda put on a coat and a hat.

These segments of history you find are always very interesting. Thanks Adam!

I guess just because you are in the same party, it doesn't mean you have to agree with everything they do and say. Good for him for standing his ground.