Fact of the Day: Conservative Clinton 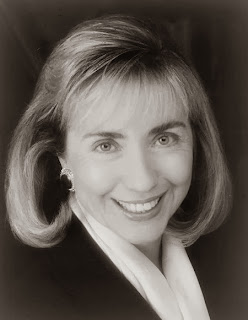 While Hilary Clinton is the wife of Democratic President Bill Clinton and was one of the leading candidates for the Democratic nomination in the 2008 presidential elections, she was originally a Republican. She was raised in a conservative family, and volunteered for Barry Goldwater's presidential campaign in 1964. Her views shifted more liberal after the Civil Rights Movement and the Vietnam War. She left the party for good in 1968 after being appalled by the campaign of Richard Nixon.
Posted by Adam at 12:26 AM

Her one eyebrow is way thicker than the other one..

That's interesting but a women is permitted to change her mind :)

Sometimes we change as we get older.

As much as I follow politics I had forgotten about this! I remember reading about it in the late nineties. I hope she is our next president.

Liberal my bum... she is pure ebil, I cannot even start to tell you how many people she killed and lives ruined in her bloody wars launched against my country. And she is also a master manipulator with the public and press....

And to think Reagan used to be a Democrat!

I did not know this. I am not addicted to her as many are, but as a strong women in politics, I do admire her. Came via Musings when I saw your post in the side bar...guess that is what they are for.

That is a very interesting fact.

at least his son Ronald Reagan Jr. had enough sense.

I actually knew this one!

Republican or Democrat aside, she is a very smart woman.

Should be interesting to see if she gets voted in

Fortunately she chose the correct side when she show her feelings against Vietnan war. Kisses, Adam:)

I go back and forth on wanting to see her get elected in. Right now I am so disgusted with the Democratic party, I might welcome a change to Republican Party.

Good Ol' Nixon. He always comes through in the end I guess.

Hilary has always been a fascinating woman.

i knew this, but forgot. i think i forgot on purpose.