Fact of the Day: Koi Fish 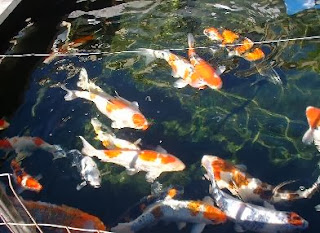 The ornamental pond fish known as Koi originated in Japan. Their ancestors were common carp who were normally raised as a food source in places like Europe and China. Like the origin of goldfish, they realized some carps would produce mutations of different colors on their scales. So they would separate the unique carp from the normal carp, which eventually led to the many beautiful varieties of the Koi fish we often see in ponds.
Posted by Adam at 9:32 AM

Email ThisBlogThis!Share to TwitterShare to FacebookShare to Pinterest
Labels: evolution, fact of the day, japan

Some of them can get SO big!

Well, I didn't know that.

Would love to have an outdoor pond someday just to have some Kois:D

I love koi. We have a few that we see in a local pond. I've seen them in abundance on holidays. Always so colorful and a delight to the eyes. Very interesting bit of trivia about them Adam, thank you.

I have a lot of Koi fish!

I love those little fish!!
xx

They look much more beautiful than when carried around in little plastic bags.

they look so cute and pretty!

This is very interesting. I thought they originated in China.

They are said to be lucky.

I remember you once told us about these fish and their origin. Kisses, Adam:)

I love seeing these fish - I think they're so beautiful!

I have always wanted some of these fish!