Fact of the Day: The Unknown Civil Rights Leader 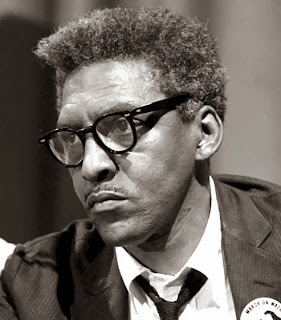 Bayard Rustin was one of most influential people in the Civil Rights Movement, but remains rather unknown today. Most credit this due to the fact that he was openly gay. He continued to campaign for civil rights in the 70s and the 80s for the LGBT community. He passed away in 1987, but was posthumously awarded the Presidential Medal of Freedom by President Barack Obama in 2013.
Posted by Adam at 12:11 AM

What a shame that he had to hide himself like that. He'd be proud to see how far we've come though.

Never even heard of him, thankfully things have changed some

Too bad he couldn't be around today to see how things are changing.

What are civil rights? haha

Well, at least SOME know who he is and what he did. Better than being forgotten entirely.

Something to take into account. Well done for president Obama.Kisses:)

Sounds like a fighter. It had to be very tough for him to be a gay black man during that time period, but he got his name out there, even if a little, to advocate for a cause he believed in!

Now I am interested to learn more about Bayard Rustin. Thanks Adam!

President Obama made excellent choices for the PMOFs. I wish BR were still alive and could see that progress is being made, slowly but surely, in the LGBT civil rights movement.

Good to know. Thanks, Adam!

True - I had also never heard of him!

Thanks to you and your blog, he's more known now! Good that you shared this piece of history

I do not know anything about this person. I rty to stay away from too much political issues.

didn't know that - thanks for sharing!

Got his due a little late

First I've heard of him to