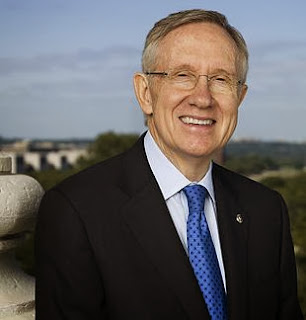 Today Senate Majority Leader Harry Reid led the Senate in passing a reform to essentially end the filibuster (which is not in the Constitution but rather a "tradition" of the Senate) as we know it. Most Republicans are very angry over it, but I would like to point out the irony in both the Democrats and Republicans as in 2005 the Senate Republican failed to pass filibuster reform to Democratic opposition.

What pushed the reform was the ridiculous attempts to prevent almost any nominee that President Obama picks to be approved by the Senate.These weren't big roles like Secretary of State or Supreme Court Justice either but rather smaller court judges and other offices that many people haven't even heard of. In this nation's history, 168 presidential nominees have been filibustered and 82 (slightly less than half) were Obama's nominees. If Republicans are mad, they have only themselves to blame.
Posted by Adam at 11:46 PM

Well-said Adam. This only happened because of there stubborn filibustering of Obama'a nominees.

The Republican Party is in danger of disappearing if it fails to articulate what it stands for. Opposing all Democratic concerns is not a way to govern. You have to be FOR something.

True in every way