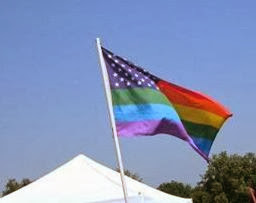 Very proud of Hawaii today as Governor Neil Abercrombie has signed a marriage equality bill. I'm honestly surprised it's taken this long as the Hawaiian State House has a very large Democratic majority (the Senate only has one Republican), but despite a few Democrats who voted "no" it passed both chambers by a good margin. Hawaii was also the place where President Barack Obama was born, and coincidentally his "home" state of Illinois (where he started his career and served as a Senator) is very close to their own Governor signing their own marriage equality bill.
Posted by Adam at 9:11 PM

I am applauding Hawaii today!

Hurray! Another US state hits a home run, with Illinois in the bull pen warming up!

Good for Hawaii!! I hope the day comes when all 50 states have marriage equality.

Way to go, Hawaii. Cool in yet another way.

We have a large Christian majority who were really fighting the passing of this bill despite the Democratic majority. I know of one family here who have a gay daughter where her uncles were totally against it. It's very hard on the family.