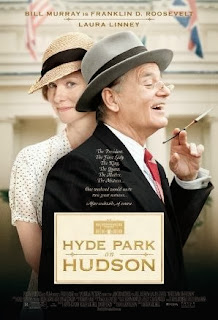 I don't exactly recall how I stumbled upon Hyde Park on Hudson, but I was intrigued as the movie featured President Franklin Roosevelt and the British monarch King George VI. FDR was one of my favorite presidents and I enjoyed The King's Speech film which told the story about George VI's struggles as a monarch. 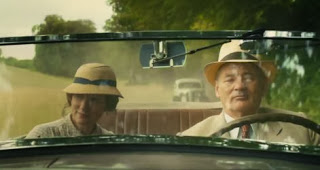 The film starts out with FDR's very distant cousin Daisy being asked to visit the President. It had been ages since the two had seen each other but Roosevelt's mother Sara insists that she should visit. FDR is ecstatic to see Daisy, and before she knows it the two form a romantic (and secret) bond during her visits to the town Hyde Park where the President stays when not in the White House.

Daisy also witnesses the President's meeting with British monarch King George VI and his wife Queen Elizabeth. They stay at Sara Roosevelt's estate in Hyde Park and are the honored guests. However their real purpose is to talk with Roosevelt to strengthen their friendship with America, and Great Britain will need their ally if war (the eventual World War II) happens. 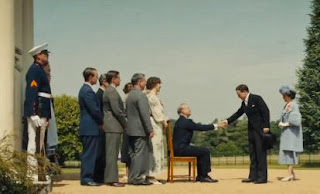 Overall Hyde Park on Hudson disappointed me deeply. It seemed like it could have been something that could rival Spielberg's Lincoln, but doesn't come close. There are many things in the film that could be debated, or just historically inaccurate. I will say Bill Murray's performance as FDR is brilliant, but the plot is too dull to make much of a difference. It's far from horrible, but it's also far from fantastic.
Posted by Adam at 2:44 PM

uhm, thanks for sharing!

I saw this movie and your last line sums it up perfectly: far from horrible but far from fantastic.

Bill Murray is actually quite a talent
ALOHA from Honolulu
Comfort Spiral
=^..^= <3

Yes, I remember the reviews at the time for it weren't very good.

I never see it. It looks interessant and I love Bill Murray :)