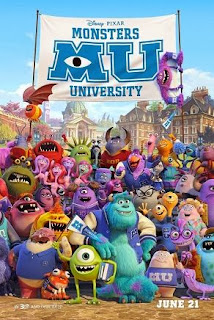 I remember watching the original Monsters Inc in my German class in high school, and then watching the English version later on. While it wasn't my favorite Pixar film, I did like it a lot. It is also one of my nephews' favorite movies so far. I wasn't terribly sure what to expect out of Monsters University as it is a prequel, and you always have to be cautious with those. 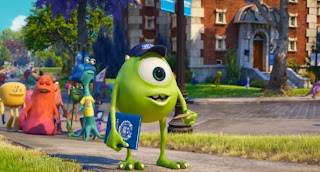 The film starts out with a young Mike Wazowski whose life-long dream is to become a "scarer" one day. He works hard, and eventually goes to college at Monsters University. Even though he knows his stuff, his appearance isn't very scary and gets him little respect. He later meets James P. "Sulley" Sullivan, who has plenty of supporters as his father was legendary.

The two become rivals but during a feud they anger the Dean so much that they are banished from their classes. Disappointed and hopeless, Mike is depressed until he sees the gathering of the Scare Games. He challenges the Dean to let Mike back into the scarer classes if his team wins, but if he loses he must leave the university for good.  He makes an alliance with Sulley, and a fraternity of misfits to become champions of the Scare Games. 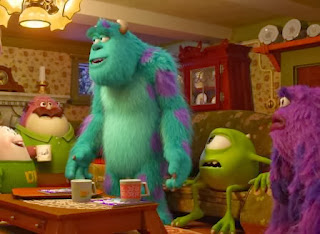 Overall I really liked Monsters University. I think the original film was a bit better but the story really surprised me. Prequels are usually pretty terrible, but this one does the original justice. It's easily one of the best animated films of the year.
Posted by Adam at 2:00 PM

Still haven't watched it as the first wasn't my favorite of Pixars, plus hate prequels

Both are on my miles-long "to see" list. Some day, some day.

My kids and I love this movie so much we watched it in the theatre, and also bought the digital copy when it came out.:D

Thanks for your lovely words on my last post!
I also liked that film!

I never could get into Monsters Inc. I doubt I'll see any more of them.

I want to see that movie ! The original movie was so good and funny, I love those monsters ! :)

We thought this one was just ehhhh. Not terrible, but not great either.

I want to see that movie so much! Love these monsters!