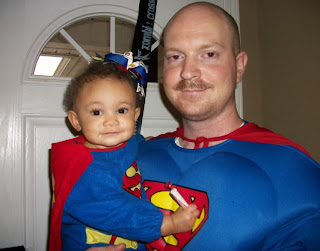 Yesterday I went over my brother Brandon's house, and I had wondered what they were going to be for Halloween. I should have guessed they would all be dressed up in Superman costumes. We bascially ate some pizza and waited for the trick-or-treaters to arrive. Everybody loved my niece Little Iz in her "Super" costume. 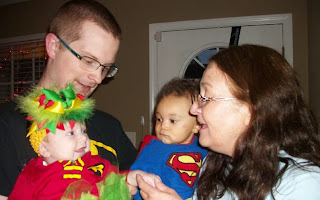 Her baby cousin Little K was dressed as Robin. This isn't the first time my nieces have met, but Little Iz was so fascinated by her cousin. Next year they'll probably be the best of friends. 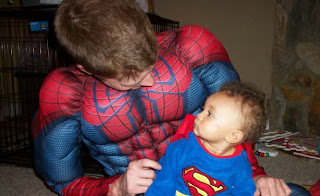 I was Spider-Man again this year, and it was neat to see Little Iz, and the family dog Blue react to the costume. Blue (thanks to her Great Dane nose) wasn't fooled, but Little Iz was a bit confused. Though she eventually realized it was Uncle Adam. Most of the trick-or-treaters thought the super-hero costumes were pretty cool. Though two girls thought Spider-Man was scary. 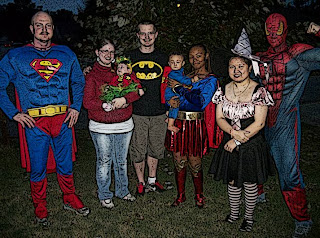 But overall we had a pretty fun night. One of the best Halloweens since my own childhood.
Posted by Adam at 2:00 PM

Email ThisBlogThis!Share to TwitterShare to FacebookShare to Pinterest
Labels: halloween

This is just so cool! I love your costume. It was the 4th rainiest Halloween night in Chicago. We still went out because my granddaughter was determined to trick or treat at every house she could get to. She never tired! I loved the Superman costumes! Too cute!

A family of fun.

you and Daisy look great Adam! You all do, cute kiddies!

how cute!! love the costumes!

Looks like so much fun! I love all the costumes. And those superhero babies are adorable.

I don't know you very well yet but I suspect you're one of those people who is going to remain young at heart forever, and that's really a great thing.

Love these costumes! So great!
You are nice Spider-man!

how much cryptonite did she eat?

What a great post. I've said it before, but it's worth saying again ~ I think you are an awesome uncle!

A whole family of superheroes!

I think the S stands for super cute!

yay! i mean a halloween as an adult that was as good as childhood i'd say is a winner. nice comic book filter on the final photo.