Our Galaxy Has Many Earth-like Planets 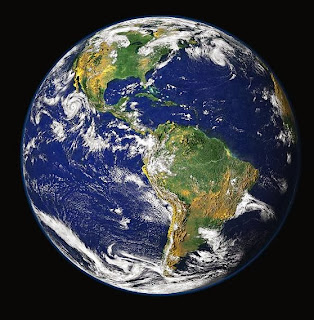 A recent scientific study has estimated that the Milky Way Galaxy (which we live in) alone has a tad under nine billion Earth-like planets within it. I know many doubt the numbers, but if you understand not only the size of the Universe, but the galaxy as well then it's not so far-fetched. Now that doesn't mean all of them are similar to the present-day Earth as we know it but are in a zone close enough to a sun to support life.

You have to imagine there are quite of a few of them wondering if they are alone in the universe. I would find it very ironic that with all the sci-fi stories about aliens coming to Earth, that in the distant-future we'd instead be the visitors to a civilized world outside our solar system.
Posted by Adam at 11:53 PM

It would be very ironic Adam....who knows what is out there on those planets.

I wouldn't want humans visiting me

It's a great big universe. Anything is possible.

I've always thought that too Adam - that we would probably encounter a civilized world as opposed to "aliens".

I've seen many aliens on earth pretending to be humans, mostly at Walmart.

fascinating thought. I often think we're not supposed to do this that's why it's so difficult!

Who knows, right? It's fun to think about.

That thought just boggles my mind!

Sometimes I am a little bit sceptic about what scientist say. Kisses, Sam:)

If there aren't any other people out there it's a tremendous waste of space---I think Carl Sagan wrote this.

It would be very arrogant of us to think we are alone in the entire universe. I definitely believe there are other life forms out there!