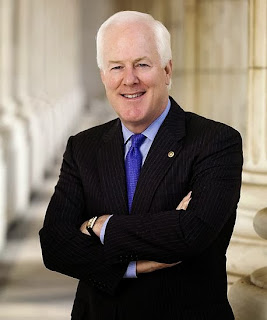 While most of America got to see Ted Cruz's embarrassing behavior during the government shutdown earlier this year, I also see that Texas' other Republican Senator John Cornyn could rival Cruz in political stupidity. American diplomats recently struck a compromise with Iran to prevent them from getting nuclear weapons. Most would say the deal overall is progress, but Senator Cornyn made a statement saying that it was all just a ploy by the White House to distract attention from Obamacare.  You know what would be a real distraction? Another pointless war in the Middle East.
Posted by Adam at 10:26 PM

I agree. He needs to just shut his mouth, or he can take his ass over there to fight the war.

Adam, your ability to see through bull gives me real hope for this country's future!

You got that right!

Texas Republicans deserve a special place in hell for depriving so many Texans health insurance. Texas leads the nation in uninsured children.

many texas policies and representatives make me sick. i don't know why they're such idiots.