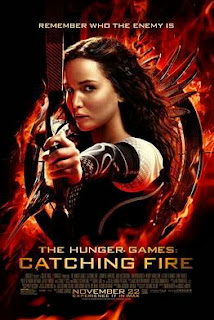 Last year I initially ignored the original The Hunger Games movie, but later gave it a chance. While I thought it was a great movie, my fiancee Daisy fell in love with the series. She soon read all the books, and couldn't wait for the movie sequel. While I didn't read the books (though I knew some of the story), I was also excited for The Hunger Games: Catching Fire.

The story starts a little less than a year after the end of the first, with Katniss and Peeta under the watchful eye of the tyrannical President Snow. He views their love-story victory in the 74th Hunger Games as an act of defiance to his government. He confronts Katniss about her becoming a symbol of hope for the oppressed people of Panem and wants to changes that. 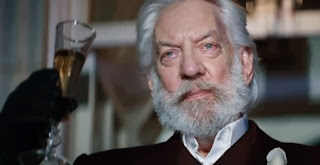 Knowing she has little choice, Katniss agrees to follow Snow's orders in his hopes to calm down any rebellion in Panem. Katniss and Peeta pretend to be madly in love and grateful to President Snow but opposition to Panem's leader grows stronger by the day. Snow is angry, and comes up with a new version of the Hunger Games where the participants are all previous champions. All of this in done in the hope that Katniss will lose. 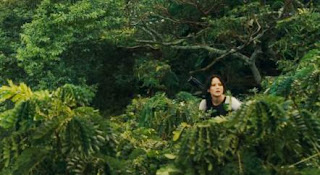 While I never read the book, I really did like The Hunger Games: Catching Fire. While the story might at first seem like it would be a case of deja vu, it does hold plenty of surprises. I loved the story, and the action scenes are still exciting and top-notch. I'd hate to rush to judgement here, but it might be my favorite film of the year.
Posted by Adam at 7:40 PM

Haven't seen either movie or read any of the books. It's on my "to do" list though!

I was so so with the first Hunger Games, but I'll give this one a try. Have a wonderful Thanksgiving, Adam.

My thoughts are similar to Kay's. I'll probably go see this one, too.

I've read the books and watched the movies. I say the movie is a good adaptation of the book.

wow this sounds good Adam, thanks for the review. I did see the first one and enjoyed it.

that says a lot of how much you liked it!

Dying to see this. I love the book series, and did like the first film. Everyone's saying it's pretty amazing:D

nice movie! And I read the book before heading to the cinema. Awesome!

I haven't read or watched any of this stuff yet. But I do like Jennifer Lawrence.

I have seen the first one and I liked it:)

we watched it the other day and absolutely love it!! While some movies tend to ruin the books (e.g. twilight), the Hunger Games along with Harry Potter really do the books juistice!! We can't wait for the next one!!

I've read all the books and seen the first movie, which I enjoyed. I'm hoping to see this one soon with my daughter.

I went to the cinema last monday to see this film and I loved it( as the first part) .Kisses:)

Yeah I think I'll have to skip this one out

I have not seen this movie because it looks like Battle Royal film :)

I can't wait to see this one!

oh wait! here goes... I read all 3 books, the books are better then the movies. its not my fave movie. I rate C-