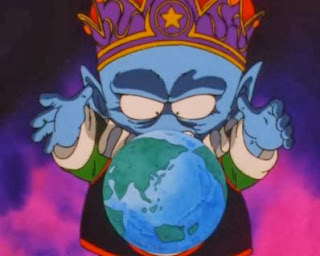 At the end of Dragon Ball Z, Goku and his friends had defeated Majin Buu, Cell, and Frieza but looking back it's hard to believe Goku's original nemesis was a blue imp. Pilaf was a self-proclaimed Emperor who wished to use the Dragon Balls (which can grant any wish) to rule the world. 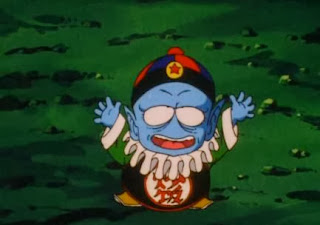 He was also the only major villain to pose no real challenge to Goku. He's not much of a warrior, instead he uses his only two minions Shu and Mai to do the real work. Despite being incompetent, he manages to gather all seven Dragon Balls and summons Shenron. 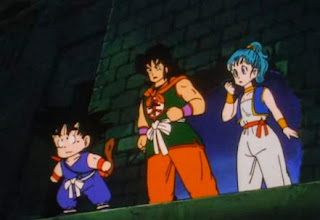 But Goku and friends manage to escape from his castle and "ruin" his wish. I loved the comic relief in that scene. 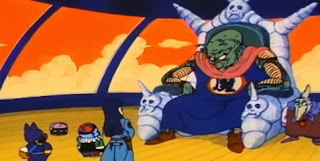 They later team up with King Piccolo and inform him of the Dragon Balls and of Goku's strength. Their alliance is short-lived, but King Piccolo spares them even after some bitterness.

They never appear in Dragon Ball Z, but do in GT at the beginning. The very old Pilaf accidentally wishes for Goku to be younger, which causes the events in GT to eventually unfold. Don't get me wrong, I loved the original saga, and when he was Piccolo's ally, but he was a villain you loved to hate.
Posted by Adam at 3:58 PM

I watched Dragon Ball Z when I was young. I didn't like Vegeta ! :)

Our son was probably grown when this came out so i don't know anything about it.

you'd have to pay me a lot of money to watch this.