The Tie Fighters were the most common star-ships used by the Imperial Army in the Star Wars films. While I enjoyed all the scenes with them in it, I have to admit the basic Tie Fighters (not Darth Vader's cooler model) are pretty lame.

One of my favorite scenes in the Star Wars Episode IV: A New Hope is the part where the Millennium Falcon defends a wave of them. Though you never really feel like they stood much of a chance against Han Solo and Luke Skywalker in retrospect. 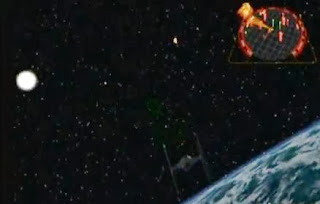 My best memories of the Tie Fighters in video games was in the Rogue Squadron games on Nintendo Gamecube. They were the easiest ship to destroy, but you do eventually get the chance to pilot one. And it's easily one of the worst ships in the game in both speed, and power.
Posted by Adam at 9:15 PM

Remember that game, yeah they were pretty bad

This all came out after our son was grown so this is Greek to me.

I have never seen Star Wars, but this sounds like an interesting game!