The X-Wing is one of the star-fighter ships of the Rebel Alliance in the Star Wars films. It is easily one of the most popular ships in the series, and one of mine as well. It was almost hard not to notice them as it was usually the choice of ship for Luke Skywalker.

I will say the scene where Luke (and Rogue Squadron) destroy the Death Star is one of the greatest scenes in cinema. I also thought they did a great job making the force "work" and make sense for Luke as a pilot just as much as it did when he was wielding a lightsaber.

Luke does makes a rough landing on the planet Dagobah right before he meets Jedi master Yoda. He is instructed to lift his X-Wing using the Force but doesn't even come close. Then Yoda makes it look easy. I much preferred Yoda as Luke's teacher than his role in the prequel trilogy. 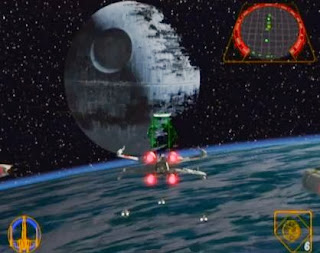 The X-Wing is often in many Star Wars video games, but my favorite had always been the ship in the Rogue Squadron games on the Nintendo Gamecube. It wasn't the fastest or most powerful ship in the game, but it also let you re-live those classic moments. So many good memories.
Posted by Adam at 10:13 PM

Never was much of a Starwars fan I'm afraid.

It was always the coolest toy too

Not into Star Wars movies...but who know I maybe oneday.

Be grand to fly in one

X-wing equals awesome! And yes...I like Yoda better as Luke's teacher too (although his fight scene in the first prequel was cool).

I'm not as big a Star Wars fan as some people, but I did enjoy those movies---back in the day.