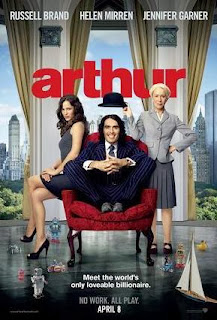 I payed attention when Arthur was in theaters back in 2011. It's a remake of the 1981 film of the same name which I hear was quite the success. I don't really care for Russell Brand, but now two years later I was interested to see if Arthur was hilarious or just plain stupid.

The story starts with spoiled heir Arthur Bach. His childish antics and embarrassing behavior has gone so far that it's ruining his mother's reputation. His mother offers him a choice; he either marries her assistant Susan or he loses his inheritance. While he doesn't love or even like Susan, the alternative is far worse so he agrees. 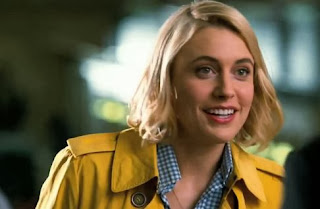 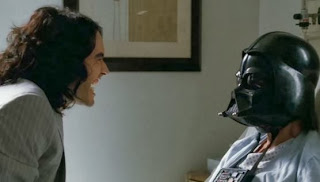 Overall Arthur was a good bit better than my pessimistic expectations. The humor can be obnoxious but some of it did make me laugh. I really did like Greta Gerwig as Naomi Quinn as she was so charming and sweet. I thought Arthur was a decent film but I doubt people will remember it as fondly as the original decades from now.
Posted by Adam at 10:44 PM

hmmm... I ve watched this one, I love Russell Brand but I would not watch it again, if you know what I mean... good review!
http://sepatuholig.blogspot.com/

I am not a Russell Brand fan either but your review makes me think I might like this.

I've seen this movie, and I must say that it wasn't of my liking. Thanks for stopping by my blog Adam!

I;ve never understood how Helen Mirren accepted the role in that atrocity

I think it's interesting film!

I loved the 1981 original with Dudley Moore, Liza Minnelli and Sir John Gielgud. I didn't want to ruin my good memories by watching the remake. Russell Brand's alleged charm and attractions are lost on me.

I guess I'm too fond of the original to give this remake a chance.

I thought this movie was terrible. Then again, I'm not a huge Russell Brand fan.

i like russell brand films. i really like his movie "get him to the greek". i laugh every time i watch it. i read one of his books, and it was ok. his other book was too odd, and i got bored. his fx talk show wasn't particularly funny, nor very interesting, thus why it was canceled. i thought this version of the author was cute though. of course my expectations weren't terribly high. the original arthur was delightful.