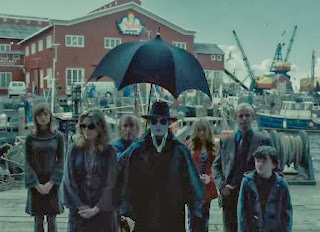 I remember seeing the trailer for Dark Shadows back in 2011 or 2012. I thought it was rather humorous, but I later heard that it wasn't really a comedy at all. Which would make sense as Dark Shadows isn't an original story, it's based on a gothic soap opera from the 1960s. 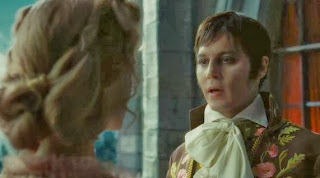 The story starts in the 18th century with Barnabas Collins. He rejects a woman named Angelique who turns out to be a real witch, which leads to the demise of his parents. Barnabas later falls in the love with the angelic Josette. One day she is convinced by Angelique's magic to walk to the edge of a cliff, and Barnabas does not save her in time. After jumping to save her, Barnabas gets up to realize his transformation (due to Angelique) to a vampire. Angelique soon convinces the townspeople of Barnabas' new self, and they trap him in a coffin for almost two centuries. 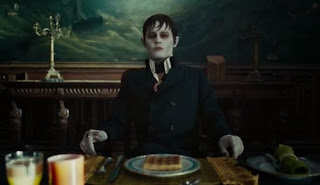 A construction crew accidentally frees him,and he returns back to his manor. He finds the newest generation of Collins, and befriends his "new" family with only the family matriarch knowing that he's a vampire. He learns that the family's legacy has dwindled down to very little, and offers to help them to restore it to greatness. He then finds out that Angelique is still alive, and is the main reason why the Collins family is still "cursed". 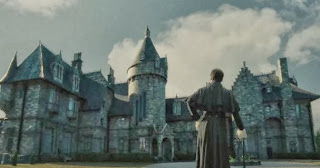 Overall Dark Shadows disappointed me greatly. It can't seem to decide if it's a comedy or a drama. I thought Johnny Depp did a great job as Barnabas Collins. However some of characters like Victoria Winters and some of the Collins only become important at random times. The later half of the story just becomes rather boring, and I wasn't very satisfied by the conclusion.  It has it's moments, but while Dark Shadows is far from awful both Depp and Tim Burton are capable of greater things.
Posted by Adam at 2:56 PM

I love this film and love soundtrack)
http://afinaskaterblogspotcom.blogspot.ru/

Michelle Pfeiffer is still gorgeous and probably my sole motivation for wanting to see this.

I loved it. But, I'm also a fan of the original Dark Shadows, too.

I actually really liked this one. I don't normally watch movies more than once, but I watched this one twice.

I didn't watch it but my husband did and he said pretty much what you did. I was going to watch it but he said I shouldn't bother. You have confirmed that decision.

I love Tim Burton and Johny Depp and this comedy was so fun,heheeh. Kisses, :)

I still haven't seen it... I try to avoid films with Depp.... all of them look the same with him wearing too much makeup and acting silly