Fact of the Day: Old America 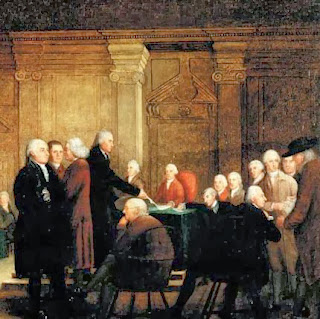 After gaining independence from Great Britain, the United States of America's first Constitution was the Articles of Confederation. Under it each individual state was nearly sovereign, and there was no real President of the nation. With a weak federal government, it proved to be a failure and was later replaced by the U.S. Constitution in 1789.
Posted by Adam at 12:03 AM

I guess America had her trials and errors too.

I didn't know, but I agree with the comment above. Even the US had its trials and errors.

I wonder where that document is now.

So much to learn about American History:)

Have a great Sunday!

All these historical facts make me want to go back to school and major in history :)

It has been a learning lesson from the beginning for the US, hasn't it? Funny that some states are threatening to break away from the US, kind of like going backwards.

Never knew they were one by one

Now some are crying for the same thing

See, I had no idea about that!

I didn't know that the USA had a "starter" constitution!

The battle over states sovereignty versus a powerful Federal government is at the core of American history.

This is something I did not know!