Fact of the Day: Red Baron 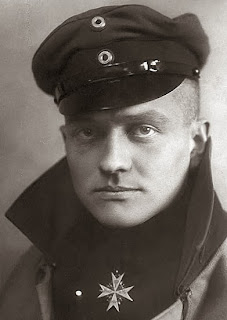 While the German World War I pilot known as the Red Baron might seem more like a legend than a man, he was in-fact a real person. His real name was Manfred von Richthofen, and despite his legacy he did not see the end of World War I and died at the age of 25 while flying in France.
Posted by Adam at 12:00 AM

Thanks for sharing this, Adam. For some reason I thought of Snoopy when I read "The red baron." :)

I thought of Snoopy, too!

My mind went to snoopy as well

Love to learn more and more on your blog Adam.
Hope you had a wonderful Christmas :)

I read red baron and I knew it would be an interesting post. I love this type of history posts. Thanks for the info, Adam. Kisses:)

I'm another one who thought of Snoopy. :) Happy Sunday!

I didn't realize how young he was when he died!

25! You surprise me again, Adam.
Those Fokker tri-planes were beautiful craft

I've seen photos of his body, pulled from the wreckage of his plane and propped up for the photograph to prove he was dead.

I've heard about him.