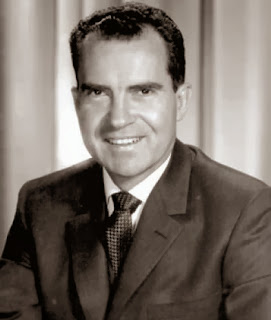 During the 1960 Presidential elections, someone asked President Eisenhower what Vice President Richard Nixon had contributed to his presidency but couldn't think of anything. His response was "Well, if you give me a week I might think of one." Nixon would later lose to John F. Kennedy in the general election.
Posted by Adam at 12:26 AM

Ouch! Growing up that always struck me as unnecessarily harsh...weren't the two eventually related by marriage? Also, fun fact, Nixon is one of two men to be on the ballot of the big two parties 5 times!

looks ebil to me

I remember the Watergate scandal.

EVERYONE was a fan of Nixon, LOL!

This comment seems uncharacteristic of Eisenhower, who always struck me as a polite fellow.

Amazing! Years ago husband and I went out with a friend to a play. He had brought along an older friend whose date was Rose Mary Woods, Nixon's secretary and the one who was supposed to have accidentally removed the missing minutes of the famous Nixon tapes. We met her several years after the event approximately 30 years ago and then some. She has since passed on herself. I remember thinking, before I really knew who she was as I wasn't told until later, what a nice lady but my memory of the evening is fast fading.

He wasn´t the best vice president but I guess he did something right. Kisses:)

hahaaa
never heard about it

Most of us in life are pretty useless. It's nice to think that someone as vaulted as a president fits the bill too.