While it was originally on PS2, the version I know Okami for was on the Wii. When Okami was praised on PS2, many noted that the paint-brush combat system would make sense on Wii or DS. While I hear the PS2 version ironically controlled better, I still loved Okami on Wii. 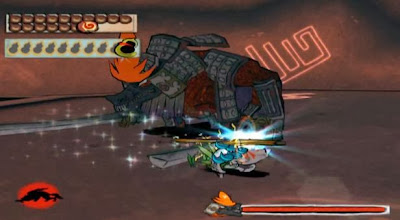 It took some getting used to, but I can see why the Wii version was criticized heavily in retrospect. Regradless it's probably the closest anyone has ever come to rivaling the greatest Zelda games. It also featured a great influence of Japanese mythology (you actually play as the wolf-version of the sun goddess Amaterasu) and classical art. It's easily one of Capcom's best games ever made.
Posted by Adam at 9:47 PM

Heard of it but never played it

Damn I own this but I have yet to finish it! Guess I'll have to upgrade to Wii U and be one of the firsts game to finish there (since my wii drive is f*cked after 7 years). Okamiden look similarly cute/awesome.