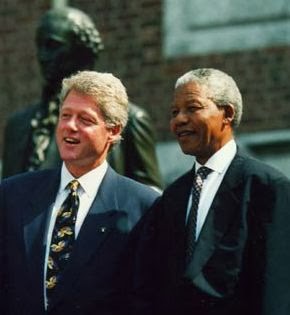 Yesterday former South African president Nelson Mandela passed away at the age of 95. Mandela led South Africa out an era of oppressive policies akin to a pre-1964 American South. He was an international hero of democracy, equality, and peace.

I'm rather ashamed that the Sheriff of nearby Pickens County in my home-state of South Carolina refused to fly the flag at half-staff despite an order from the President of the United States. He claimed that the honor should only be reserved for Americans, but knowing the ultra-conservative reputation of Pickens County, I doubt that was his real reason.
Posted by Adam at 9:02 PM

The Sheriff has a very small mind... Mr. Mandela helped to transform a country and is a guiding light for us all.

Mandela and his example made the world a better place. This sheriff is not.

Adieu, Madiba! It pains my heart that he is gone. RIP Mandela.

The sheriff sounds like a small-minded person; he should get out a little more. We need more people like Mandela in this world.

Nelson Mandela was a true hero. A true example of how one man can make a difference. It's amazing to me that he exhibited no bitterness after those 27 years in prison.

That's very sad that the sheriff took that position. So the flag should really only be flown at half-staff for Americans? Sad.

RIP Nelson Mandela, it was a wonderful man.
Have a lovely weekend.

Nelson Mandela was a wonderful man who promoted love and peace throughout the world. He will be missed by many.

i agree with you adam. mandela was very inspiring man who earned great respect. it's unfortunate that some don't seem to value or understand this.