I originally didn't hear about Pacific Rim until about the time it hit theaters back in July. I was very interested as it looked promising, and it was inspired by Japanese monster films like Godzilla. Though in truth, it's almost like an American version of the anime Neon Genesis Evangelion. 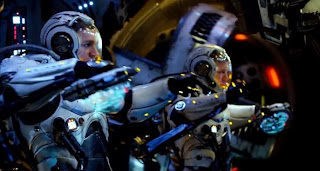 The story sets off in a world not terribly far in the future. One day a giant monster called a kaiju (a Japanese word for "monster") wrecks havoc and leaves the world in shock. Earth's nations forget old grudges and work together to counter these monsters. By creating giant robots called Jaegers (the German word for "hunter"), they effectively stop the kaiju from causing much harm. 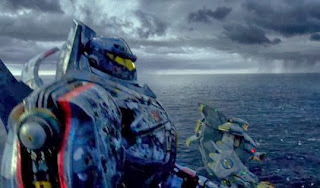 However after a few years they realize that the kaiju are alien creatures who are arriving on Earth through a portal in the Pacific ocean. Despite the strength of the Jaegers, the Kaiju are getting stronger and appearing more often as time moves on. Eventually the Kaiju are almost unstoppable but hopes remains in one of the few pilots remaining Raleigh Becket and his co-pilot Mako Mori. 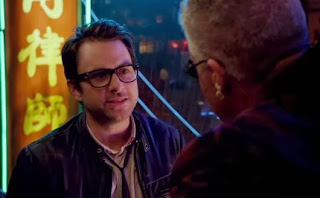 Overall I thought Pacific Rim was a thrilling and amazing film. I really liked Charlie Hunnam as Raleigh Becket, Rinko Kikuchi as Mako Mori, and Charlie Day as the slightly-mad scientist Dr. Newton Geiszler. While it does draw a lot similarity to Neon Genesis Evangelion, there are countless differences and a far-less melancholic tone. While it isn't perfect, it's easily one of my favorite films of the year.
Posted by Adam at 3:00 PM

I watched this recently. I'm sorry to say I didn't share your enthusiasm for this film. Too derivative for me.

Love this movie soooo much. The kids and I watch this almost every other day...seriously. Yay for Charlie Hunnam:)

I watched this one sometimes ago, its quiet entertaining but I rate a D. There were none good movie in the cinema and so I thought... ehr.. why not. cant wait for you to review Hunger Game Catching Fire, I watched it a week ago.
http://sepatuholig.blogspot.com/

Still haven't seen it, but was shocked when it flopped at the box office

I haven't seen it yet, but I have heard really good things about it!

I watch pacific Rim last movie and that was really amazing. I love that movie. I am big fan to all Sci-fi movie. As a fan to Sci-fi movie I watch Pacific Rim Uprising online trailer and really enjoyed this trailer. Now I am excited to watch Full movie.