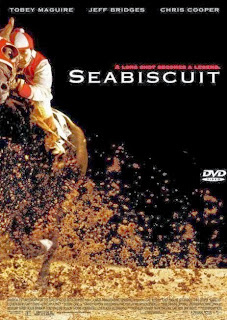 In 2003 I do recall when Seabiscuit hit theaters, but at the time I had little interest in seeing it. I remember Tobey Maguire (who already taken the role of Spider-Man) was in it, and that it was obviously about the famous horse Seabiscuit. After ten years I was intrigued enough to give it a try.

The story starts with the life and beginnings of both Red Pollard and Charles Howard. Red Pollard is the son of a Canadian family ruined by the Great Depression. Through his interest with horses, he eventually becomes a jockey. Charles Howard became a successful businessman after he becomes knowledgeable with automobiles.

Charles Howard eventually takes an interest in horses and becomes the owner of the over-looked Seabiscuit. The horse quickly builds a reputation for himself, and eventually becomes one of the most respected in the country. Howard asks Pollard to train Seabiscuit to challenge the legendary horse War Admiral in the Match of the Century.

Overall I was fairly disappointed by Seabiscuit as I heard it had some critical acclaim. But I found it rather boring and I didn't care for some the historical inaccuracies such as the cause of Red Pollard's blind eye. I enjoyed the parts featuring the horse Seabiscuit, but the rest is underwhelming.
Posted by Adam at 10:27 PM

Yes, this one always struck me as boring. Then again, I find Toby Maguire boring overall...

this is the first time I hear about this movie... it sounds interesting.

I did see that movie and really enjoyed it.

Yeah it was just okay at best

I'd give it a higher rating than you, but I doubt I'd want to see it again.

yeah, i was unimpressed when i saw it as well. i didn't really him in spiderman either. my expectations of both were too high.