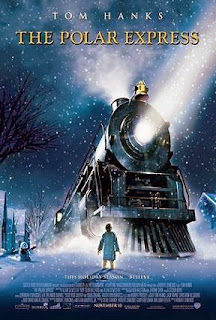 When I was in elementary school in the early to mid-1990s, I do fondly remember reading the 1985 book The Polar Express. I do also recall when the movie came out in 2004, but at the time I wasn't terribly interested. The book was fairly short, and a real film seemed like a terrible idea. But years later I heard some praise, and since it's Christmas I decided it was about time.

The film is generally the same as the book but with some more stories. A boy isn't very sure that Santa is real, but one Christmas Eve he awakens in the middle of the night to the sound of a nearby train. He goes out in the front yard to discover the train right next to his house. The conductor calls him by name and asks if he wants to visit the North Pole. While hesitant at first, he jumps aboard though he often wonders if he's dreaming.

He discovers other people on the train and everyone realizes that it's really a magic train to the North Pole.  Not sure if it's a dream or not, he decides to see if the train really reaches the North Pole. He'll meet the strange staff on the train, good friends, and even a guardian angel. But will he meet Santa?

Overall The Polar Express was a lot better than I expected back in 2004. I think the book is better and more to the point though. The first half is a tad boring, but the end is a bit of Christmas magic. I wouldn't call it a Christmas classic, but I enjoyed it.
Posted by Adam at 8:38 PM

This is one of my families favorite holiday movies. We watch it every year on my birthday (Dec. 23), always serving hot cocoa while we watch it.

I like the hot chocolate song and dance number with all the waiters on the train.

It a wonderful film. Kisses:)