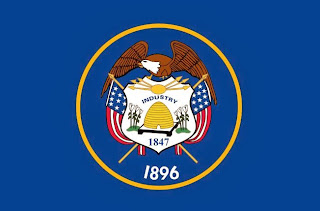 While New Mexico's progressive ruling on equal rights for same-gender couples was a nice surprise, I never expected to see another state do the same in less than a week. What's even more shocking is that this state is Utah where the Mormon majority population usually vote for Republican politicians. A judicial decision found a previous Utah law against marriage equality unconstitutional due to the 14th amendment's equal protection clause.  With this Utah has become the 18th state to do so, and hopefully we'll see more join them.
Posted by Adam at 4:00 PM

I suspect that Utah court judgment will be appealed. In fact, I think there's already an application pending to suspend the court decision until the appeal is heard. That's what it said on the news anyway. People are rushing to get married while they can!

Oh my gosh, that's awesome! And so surprising too considering how conservative Utah usually is. From reading that above comment, I hope it lasts and I'm so glad to for all the couples that can be married now!

Utah is a state I would have expected to be one of the last to do this. Way to go, Utah!

Wow! I didn't know that! I'm surprised too!

I was also thinking Utah would be one of the last. If they did it, what are the rest waiting for!?