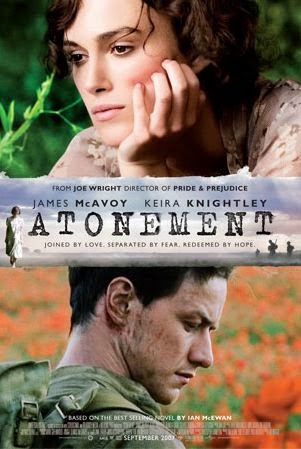 Back in 2007 I had no idea that the movie Atonement even existed. I loved James McAvoy's portrayal of the young Charles Xavier in X-Men: First Class. I also really like Keira Knightley as an actress. I had heard Atonement had done really well critically so all three factors made me want to see it.

The plot begins in a 1930s England in the house of the wealthy Tallis family. Two sisters Cecilia and Briony Tallis have known one of the servant's son Robbie Turner for years. The younger sister Briony even has a childish-crush on him. However Robbie asks Briony to deliver a letter to her sister, and reads the letter without asking. She is shocked and jealous that the letter was very romantic, and she starts to think the worst of Robbie.

One night during a dinner-party, Briony's twin cousins go missing and everyone searches for them. While the boys are fine (thanks to Robbie), Briony finds her other cousin alone in the field. The unthinkable happened in the darkness before she arrived. Her imagination runs wild and she blames Robbie. With his life wrongly ruined, Robbie eventually joins the army during World War II, and only until her teenage years does Briony realize the greatest mistake of her life. She becomes a nurse to ease her guilt and hopes that one day she'll be able to talk to Robbie and apologize. 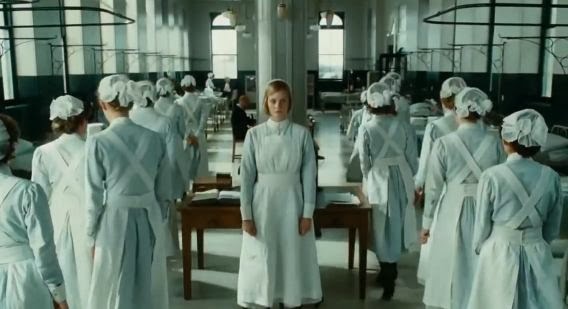 Overall I thought Atonement was a fantastic film. While it isn't perfect, it is refreshing as this British romantic-drama is much different than your typical American movie. The only negative thing I can say is that I wasn't happy with the ending. Though I understand and respect the artistic value of it.
Posted by Adam at 3:00 PM

I missed this one when it came out, but you've convinced me to look it up and give it another chance.

I saw this movie, and really enjoyed it! I read the book first, which was even better.

I really liked James McEvoy in "Atonement" and "X-men: First Class" too. Another good movie that he's in is "The Last Station" about the last weeks of Tolstoy's life.

I remember wanting to see this one at one point, but forgot all about it. I need to put in on my to rent list!

This was such a depressing movie. I like happy endings.

A great story ruined by cold and pointless direction and Keira's horridly superficial acting and teensy facial expressions. And James McAvoy's talent was pretty much underrated in it .....

I read the book and watched the movie and I absolutely loved them. Fantastic story.