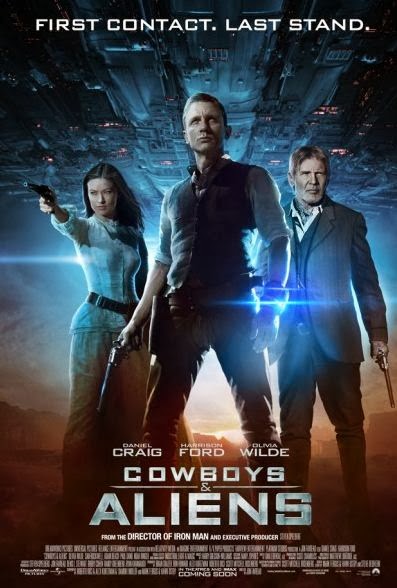 I remember when Cowboys & Aliens came out in 2011. I thought the concept was rather dumb, and I wasn't exactly motivated to go see it. However a few years later I decided it may be at least somewhat good. It has got James Bond actor Daniel Craig, the legendary Harrison Ford, and the lovely Olivia Wilde. 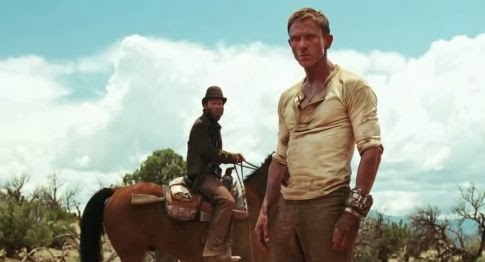 The plot begins with a man named Jake Lonergan waking up with amnesia. He encounters a lot of terrible people until he gets to a small town. Many of the townspeople are good honest folk, but after he brings some karma to a bully named Percy Dolarhyde does he find out a little about who he is. People recognize him and know his name and unfortunately for Jake the sheriff is not his fan. 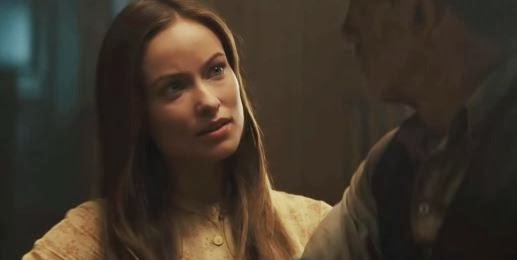 However before Jake leaves town, a mysterious group of space-ships cause havoc. Many of the citizens go missing, and Percy's father Woodrow makes an uneasy alliance with Jake after discovering he has a strange object on his wrist powerful enough to counter the aliens. Along the trip to save the people of the town, Jake is befriended by the beautiful Ella Swenson who knows the aliens too well and uses this knowledge to help them on their quest.

I really did like Daniel Craig, Harrison Ford, and Olivia Wilde in Cowboys & Aliens. However while it's a decent movie with lots of action; the plot is really dumb. Ford's character Woodrow Dolarhyde even mocks the alien's strange motivation for terrorizing the planet. The wild west cowboys and sci-fi aliens should not hang out together.
Posted by Adam at 4:00 PM

I agree: dumb plot, and far too derivative of other Sci-Fi pics.

haven't seen it, myself.

I think it's nice movie.

I just can't get past the title enough to even give this one a shot! Sounds uninteresting!