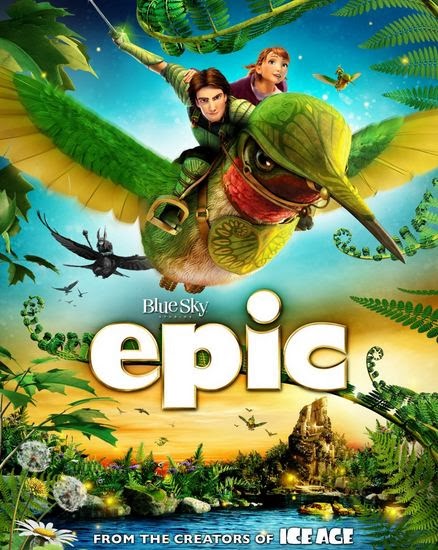 I heard of Epic last year, but never went to see it in theaters. I honestly didn't know much about the film, and I decided to wait awhile before I watched it. Fortunately it lives up to its name.

The plot begins with a young woman named Mary Katherine (who goes by MK for short) who goes to visit her father who she hadn't seen in quite some time. Her father is a scientist who lost his career and his wife to his belief of a tiny group of people who live and restore the forest. MK thinks her father is crazy, but one day she is magically shrunk down and has no idea why. 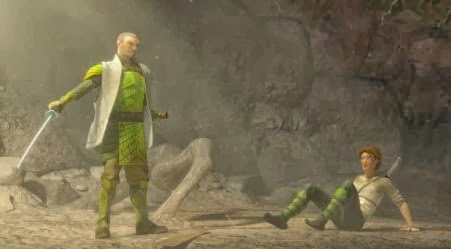 She finds out that a dying queen of the forest chose her to protect a leaf-pod that contains her legacy. She is soon met by a man named Nod who has left the guardians of the forest known as the Leafmen. Despite no longer being a soldier, his old commander (and father-figure) Ronin request that all three of them work as a team to save the forest from the evil Mandrake.

Overall I really enjoyed Epic. I wasn't a big fan of the artistic style at first, but in motion it looks spectacular. I really liked MK and her (eventually) bonding with her father, Ronin's swordsmanship against Mandrake's forces, and the goofy characters the trio meet in their journey. While it isn't perfect, I'd love to see a sequel one day.
Posted by Adam at 3:00 PM

Sounds really nice! :) The mousse is so cute haha!

I haven't see this movie yet...will see if it's on Netflix.

I haven't even heard of this movie. I watched Jack Reacher for the first time on Netflix last night. It was better than I thought... though a little gratuitous in violence at times.

Nice, I must see this movie ! Have a lovely week Adam :)

I have seen, I must agree it was pretty good.

I'll have to watch this one. I enjoy a good animated movie. I think the last one I watched was The Croods, which I thought was great.

This was such a cute movie! We loved the pug!

But the vibration when riding a hummingbird is annoying after a while.

I enjoyed what I saw of it

I loved the film, so lovely and gorgeous and filled with warmth and epic creativity!