Fact of the Day: The Almost State 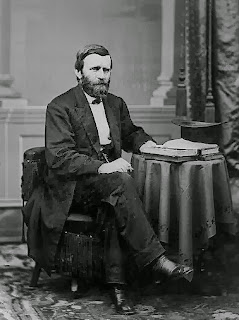 In the 19th century, President Ulysses S. Grant originally wanted the Dominican Republic (known then as Santo Domingo) to join the United States with promise of eventual statehood. He thought it would be a safe haven for African-Americans who were being oppressed in the Southern United States. The move failed to gain approval from Congress.
Posted by Adam at 12:00 AM

That's new to me!

I really really really doubt that. Puerto Rico (something that has been a U.S. territory for a long time) will have a difficult time getting statehood, something they had voted they wanted to do which needs Congress to approve

I didn't know this. I knew Lincoln had considered sending the liberated slaves to Central America but Frederick Douglas talked him out of it.

I hadn't heard this before.

Hope you have a good Wednesday.

Interesting piece of news, though it is late.

51 would just be an odd number

wonder how that would've worked out!

It would've been interesting to have the DR as a state. So many baseball players are from there.

First time I hear of this. Cool fact!

I had no idea! Many made their way to a safe haven in Canada.

Didn't know that one !

Oh gracious! I had no idea! This is so interesting!