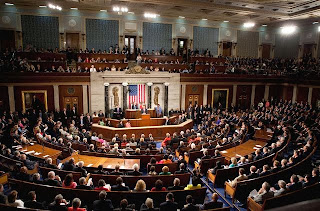 While the U.S. Senate is represented by two Senators of each U.S. state, the House of Representatives are represented based on a state's population. The first congress had only 59 representatives, and grew along with the country's population. However Congress in 1911 prevented that number from going higher than 435 regardless of population.
Posted by Adam at 12:00 AM

I guess it had to stop somewhere with the number of people.

Good efforts. All the best for future posts. I have bookmarked you. Well done. I read and like this post. Thanks. Analog dome camera in Angul

Not sure if this is really representative of the population though...

That is the fault of America, ha ha ha, lol.

Oh I had no idea about the 435 limit. Interesting!

Have a Marvelous year ahead!!!

may be a good thing.

I learn a lot coming here. Thank you Adam!

This is a very interesting post, Adam because I never understand about politics. Kisses:)

Bet there is a lot of hot air in there

Thanks. I knew there was a limit but I didn't know how or when this came about.

In my country it's about 350 representatives... maybe.

Limits are always a good thing. Especially in politics!

I imagine they wouldn't be able to fit anymore into the chambers. Besides, there's already a gridlock as it is.