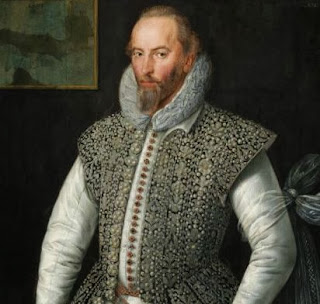 Sir Walter Raleigh established the Roanoke Colony for Queen Elizabeth I in present-day North Carolina. While it was suppose to a permanent settlement, years later nobody could find any of the colonists left behind. It has since been called The Lost Colony of Roanoke as nobody is exactly sure what happened to them.
Posted by Adam at 12:00 AM

Email ThisBlogThis!Share to TwitterShare to FacebookShare to Pinterest
Labels: fact of the day, North Carolina

Imposing image of Sir Walter Raleigh ! They were a bit over dressed in those days :)

It's always a huge project/field trip for the school kids here in North Cackalacky!

Wonder what happened to the people then!

Makes you wonder what happened...

They recently referred to the The Lost Colony of Roanoke on the show 'Sleepy Hollow'.

they had an episode about it in SLEEPY HOLLOW recently

I just watched a show called "America Unearthed" and they investigated this mystery! I had never heard of it before.

One of history's big mysteries!

Such a strange and mysterious story!

Now I am really curious.

The aliens did it

The disappearance of those colonists haunts mystery addicts to this very day.

I noticed you have a new photo of yourself. I like it.

I want to know what happened to him !

So strange how a whole colony can just disappear!