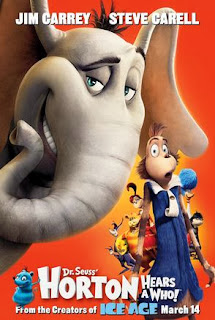 As a child, Dr. Seuss' books were my all-time favorites. Though I don't think I ever remember reading Horton Hears a Who! back then. It's actually one of Dr. Seuss' books inspired by his political views (he was a liberal Democrat), with the plot serving as an allegory to the American occupation of Japan after World War II. I don't really recall if I remember hearing about the film version of Horton Hears a Who! in 2008 but due to my admiration for Seuss I decided to give it a try. After-all it couldn't possibly be worse than 2003's The Cat in the Hat. 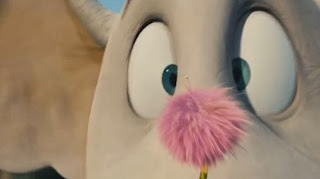 The film starts out with Horton the elephant who lives happily in the jungle. One day he sees a small speck and after hearing it make sound, he wonders if there is a tiny person or people living in it. He goes above and beyond to rescue it and is determined to see if it's true or if he's imagining things. Then out of sheer luck, when Horton attempts to communicate he receives an answer.

Horton was right, and there is a town called Whoville, and Horton talks directly to its Mayor. The Mayor however thinks his voice was originally a joke, but Horton convinces him that Whoville is not a perfect little world but rather fragile and in trouble. Unfortunately no one in the jungle can hear the Mayor, and none one in Whoville can hear Horton. The duo are determined to save Whoville and convince the citizens of both worlds that there is more than meets the eye. 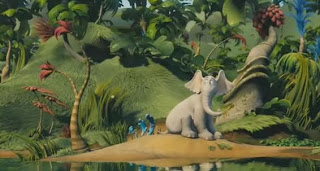 Overall I really enjoyed Horton Hears a Who! even though I don't think I read the book. Movies based on Dr. Seuss' work are often difficult as making a real film on such short books is no easy task. The extra story is more entertaining than boring which is surprising. While it could have been better, if Dr. Seuss was alive today I think he would of been proud of the film.
Posted by Adam at 3:00 PM

I'm not familiar with this one. I do like the one where Horton (?) climbs a tree and sits on a nest until it hatches an elephant bird. Loved that one as a kid.

Sounds interesting, is it possible to see it also in Italy?
Alessia
THECHILICOOL
FACEBOOK
Kiss

The kids and I love this film. We've seen it dozens of times:D

I never see Horton but is must be very funny ! :)

I liked this one!

I've read that book to my class and really loved it. I think I enjoyed the movie too. My memory is dim about it. My favorite though is Horton Hatches an Egg. It leads to all kinds of discussions in a classroom.