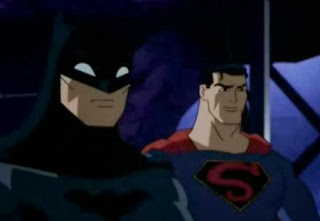 Like many of you know, I'm a big fan of comic book heroes. DC has made a lot of great animated films in the past couple of years, and it's taken me quite some time to enjoy them all. While some were a bit disappointing, many of the more recent ones could rival their silver-screen counterparts. Justice League: The New Frontier was the first in the series to make a tale about DC's greatest team of heroes. 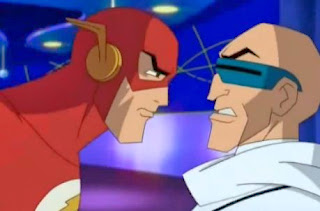 Unlike most films on DC comics, The New Frontier is set in the 1950s and 1960 which is the same time that the Silver Age of Comics started. So many of the characters resemble how they were back then. The film has many members of the Justice League already saving the day. Except for Hal Jordan who is still a pilot who just got out of his service in the Korean War. 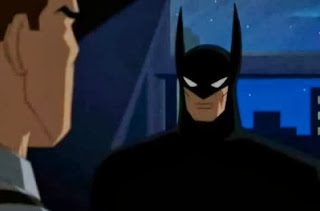 Besides a confrontation with a super-villain or two, things are fairly typical for Earth's heroes. However Batman and others have noticed strange people under the influence of The Centre. They learn that The Centre is not a rather magical force, but an evil being ready to bring "justice" to mankind. 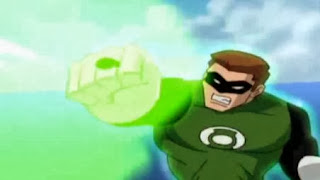 At first Justice League: The New Frontier seems pretty rad. I thought the retro art style was really neat and the animation is superb. I also liked how they spend rather equal time for each member of the Justice League in their stories. However the ending and the villain The Centre were pretty terrible, and ruined most of the plot. Like many of the early original DC films, it holds promise but it is rather disappointing.
Posted by Adam at 3:00 PM

I haven't seen this.

Yeah this one wasn't that good

When I was young, I looked Batman cartoon a lot, he is my favorite hero !

Wow, I haven't seen this, but want.

Batman was so cool!!

I never was big on comic books, but my son was. He loved all of them plus the Beatles.

Never seen this one

I haven't seen the animated stuff, but I sure did read a lot of comics in my youth and still have them stored somewhere.

I grew up reading and devouring comics in my school days. Nice to see some of my childhood heroes here.