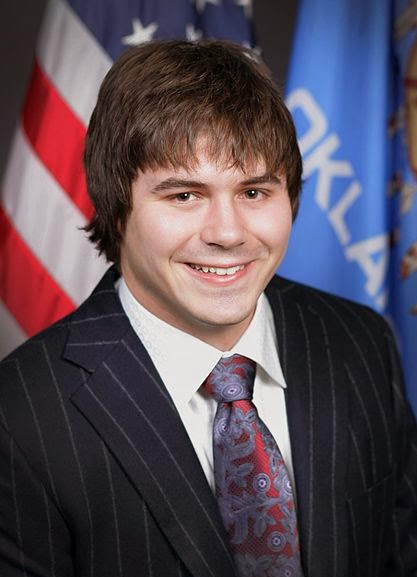 Recently a Federal judge ruled Oklahoma's marriage inequality law unconstitutional, and if the ruling stays it will be the first state in the deep South where marriage equality will be a reality. The reasoning for it being unconstitutional is that is contradicts the 14th amendment's equal protection clause. Now State Rep. Mike Turner (R-Edmond) has thrown out the idea of prohibiting all marriages to satisfy the equal protection clause requirement. Honestly I think it's pathetic that someone would resort to a bizarre idea like this to discriminate against the LGBT community, but I bet social-conservatives are now feeling a bit ironic as now someone (from their own party) is trying to infringe on their civil liberties.
Posted by Adam at 11:00 PM

he sure does have the stupidest of hairdos

Yay! Everyone gets to live in sin then!

Republicans kicked the marriage equality idea down the road by saying this should be left to the states, but now that the States are voting for it the Republicans want a Constitutional amendment calling for marriage to be defined as one man and one woman. So hypocritical!

they'll never get enough support for a constitutional amendment, maybe in the 90's and early 2000s but not now. Funny how they really only became fascinated with preventing marriages after Lawrence v Texas. Showing that is was never really about marriage but bigotry.